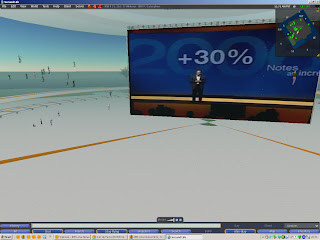 Tateru Ninu writes about a Linden Labs case study on how IBM successfully used Second Life for conferences and meetings, late last year. It's an interesting read, but somehow it feels out of place in 2009. It's like an echo from two years ago; this report could have been written during the 2006/2007 SL hype, when IBM Lotus even had a virtual LotuSphere conference (snapshot above). Yet, this report deals with events that happened in late 2008! It seems another part of IBM is only just now discovering what's possible in virtual world environments? Anyway it's good to see new initiatives coming from IBM, once again. A few quotes:

“The immersion [in Second Life] resulted in a very strange, yet compelling psychological effect, where part of me really felt like I was physically there."

“When people woke up the morning after the virtual meetings and thought about the day before, it wasn’t like remembering a webcast or a phone conference. We truly felt as if we had attended a real-time meeting, interacting with others and carrying home practical information.”

This is something I recognize from last year, when I attended the Virtual Business Expo. It may seem unlikely for those who've never tried it, but Second Life really is a good place to hold a conference.
at 15:08 No comments:
Email ThisBlogThis!Share to TwitterShare to FacebookShare to Pinterest Speaking of social space, via Hamlet, we get to take a look at the Star Trek roleplay environment being prepared in Second Life.

at 19:41 No comments:
Email ThisBlogThis!Share to TwitterShare to FacebookShare to Pinterest

Many hardcore gamers have had difficulties in classifying Second Life, as it is not really a game. It’s an MMO of course, but without any gameplay! This is, incidentally, why always cringe a bit when someone says they "play" Second Life.
One of the categories that has been devised to classify Second Life and similar worlds, is ‘social world’ which nicely describes Second Life’s main attraction: interaction with other residents.

Eve Online is nothing like that, at least not yet. It’s a real game with gameplay, goals and rules, where pilots make a profit, get shot at and occasionally even get podkilled (not a permanent form of death, luckily).

And yet, Eve Online is not like the average MMORPG either. Eve’s single shard universe and it’s open design allow for interaction between all players online on any given moment, and a freedom of (career) choices and things to do that is really unique. There is almost no grind and, apart from some specific missions, there are very few linear paths you must follow. You get to do what you'd like to do within your possiblities, it's really up to you! In this regard, Eve Online shares the openness of social worlds like Second Life.

And I think will get even more social in the foreseeable future. For years now, there has been talk about "ambulation" or “walking in stations”, which is the ability in Eve Online to dock your spaceship at a station, leave your spaceship, walk to a bar or your captains' quarters and interact there with other avatars like the one depicted here. This is quite a big development, given that there has never been a true avatar in Eve Online! I have never seen more than my avatars' mugshot, which is on the login page, but this is set to change with “walking in stations”.

In development for years and repeatedly demonstrated, this development could potentially alter the way Eve Online is inhabited by it’s pilots, as it is truly a social innovation in the game, liberating the avatar from the spacecraft and allowing for more social interaction than already possible now. Certain parts of Eve Online – for instance the bars to be opened at the promenades of high security space stations – may soon resemble Second Life more than some of Eve’s hardcore pirates may find appealing. I wonder if that will lead to new usages of Eve Online? Will there be business meetings at a space bar, somewhere in Eve's near future? It's certainly possible, even though the current subscription structure prevents irregular casual use and makes such scenarios unlikely.

We don't know when "walking in stations" will hit Eve Online. I'm hoping for the first post Apocrypha expansion, which is set for late 2009, but CCP hasn't made any official announcements yet.
at 18:27 No comments:
Email ThisBlogThis!Share to TwitterShare to FacebookShare to Pinterest

Master the game: your attitude helps, too

For any MMO game or virtual world developer, attracting sufficient numbers of paying customers is a crucial part of running their business. There has to be a critical mass of players to keep the game going, and these players also have to foot the bills. After all, these developers are in it for the money, or at least they need enough of it to stay afloat!

That'ss why game developers keep a keen eye on user retention: what percentage of new users decides to stay?. It is often difficult enough to attract new players with free trials and such, and of the few people who come to give a product a spin, even less decide to spend money and stay around. Hence the interest in any games' new player experience: if it's too difficult to master the basics of the game, user retention will be low. For example, a friend of mine decided to try out Second Life, but after bumping aimlessly into trees and other dazed newbies for about thirty minutes, he just gave up, never to return.

Linden Labs has been struggling with this for years, but apparently they are not alone. CCP, Eve Online's creator, is ramping up an expansion to Eve which will feature a completely revamped new player experience, mostly to counter Eve Online's reputation as being notoriously hard to master.

To be honest, I didn't find Eve Online that hard. I didn't have any MMORPG experience at all, so I blamed the difficulties I encountered on myself, thinking it was my problem instead of Eve Online's! Perhaps this attitude allowed me to appreciate the game more than others, who might have expected an experience similar to games they played earlier. Being a total n00b sometimes does have it advantages!

But I think it's more than that. It's also an attitude thing! It's about a new players' willingness to accept a new game as is; it's about having an open mind to the new environment and it's possibilities or problems. It's also about having a certain curiousity and persistance, which helped me overcome the first hurdles in more than one environment. Perhaps something to keep in mind, the next time you try out a new game?

Unfortunately for game developers though, they can't expect the average user to be so forgiving. Hence the need for exquisitely honed and perfectly balanced new player experiences..
at 00:30 No comments:
Email ThisBlogThis!Share to TwitterShare to FacebookShare to Pinterest

Last friday, I picked up my old server from our local computer shop. They helpfully transformed it for me into a new family pc, complete with ATI HD3800 gpu and a 19 inch widescreen monitor. And yes, it does make a huge difference when compared to the laptop I used before! Especially the Eve Online graphics are much better. Unfortunately I haven't been able to enter Second Life on it yet; each time I try, the graphics driver crashes. Any hints would be welcome..

Meanwhile, here's a shot from Eve Online. It shows the shark fin or mohawk on top of my Myrmidon battlecruiser, which reflects the dust and gas clouds surrounding it, complete with the greenish colour of the skies in this particular system. The level of detail is really stunning, especially when viewed in large format of course! 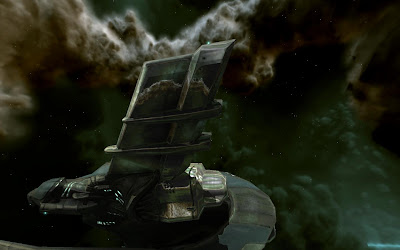 at 00:09 No comments:
Email ThisBlogThis!Share to TwitterShare to FacebookShare to Pinterest 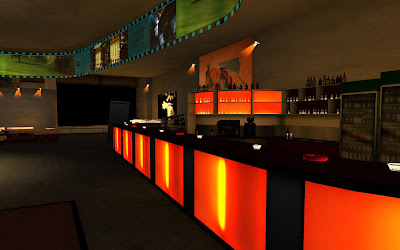 This is Twinity's Homebase Lounge in Berlin, where some of the Berlinale film festival activities take place. Unfortunately there's no activities planned for tonight; hence it remains quiet here for the time being.
at 20:41 No comments:
Email ThisBlogThis!Share to TwitterShare to FacebookShare to Pinterest 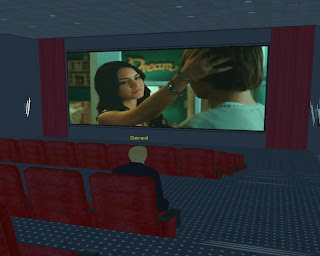 In a couple of days, Berlin will be host to the Berlinale Film festival, and Twinity's virtual Berlin takes part in several activities. There will for instance be live streams from events, but also a mixed reality panel discussion which will, in both worlds, take place at the same location! Mixed reality events have of course been done before, in Second Life and probably some other venues as well. But, as far as I know, it's a first mirror mixed event for Twinity. The fact that it's not only mixed but also mirrored is quite interesting as well; I wonder if this a first, for virtual worlds in general? Good for Twinity, as an event like this a natural fit with their mirror world philosophy! Here's a quote from a press release they emailed to Twinity's citizens:

"A particular highlight of these exclusive Berlinale livecasts is the 'Akademie Breaks' panel "Because they know what they are talking about – How first hand film teaching inspires!" with Michael Ballhaus, Thomas Binotto, and Peter R. Adam. This panel discussion will be held on 11 February in the real and the virtual HomeBase Lounge in Twinity simultaneously. The Twinity 3D community can catch the entire 'Akademie Breaks' program, organized by the German Film Academy from 09 - 12 February, and the event series 'DigiDays' live in the virtual HomeBase Lounge. "

Even though I'm not much of a film fan, I plan to take a look next week to see how it works out. See you there, perhaps? If you plan on visiting, make sure to start on time; installing Twinity and getting used to the interface isn't that hard, but it takes a while to load the virtual Berlin environment if you go there for the first time.
at 18:44 No comments:
Email ThisBlogThis!Share to TwitterShare to FacebookShare to Pinterest
Newer Posts Older Posts Home
Subscribe to: Posts (Atom)