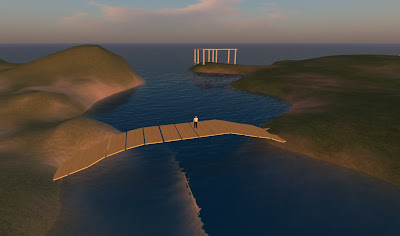 A while ago I loaded a second island; my eleven year old niece Emma built this beautiful bridge between them. Must have been hard to position the prims!
at 13:01 2 comments:
Email ThisBlogThis!Share to TwitterShare to FacebookShare to Pinterest

CCP, the creators of Eve Online, publish a Quarterly Economic Newsletter (QEN) in which they provide a lot of data concerning Eve's economy. In the QEN for Q2 2009, on page 13, we find this interesting tidbit:

This segment of the QEN discusses the distribution of characters and ISK (Eve's in game currency) throughout Eve's single shard universe. For those of you unfamiliar with Eve, here's a quick primer on security in Eve Online's New Eden. This universe is divided in three areas, each with a different security policy. Pilots in high security space (highsec or hisec) are protected by the (quite effective) in game NPC police force called Concord, which provides the most protection on areas with security level 1.0, but a little less in 0.9, and so forth to 0.5 where a pilot is least protected. Pilots in lowsec (security levels 0.4 to 0.1) should not count on any protection; it is essentially a deserted wasteland with the occasional hornets' nest of pirates. Nullsec (0.0) is altogether different; player run alliances own these areas and they dictate who's safe or not.

Back to the QEN: it says, in short, that most of the characters - 70% - and ISK are located in high security space. This probably also means that highsec is, for CCP, the most valuable area in Eve Online in terms of paying customers. I know that '70% of the characters' doesn't directly translate to '70% of the paying customer base', but alt characters and multiple accounts are as common in highsec as they are in nullsec. At any rate, it seems that highsec pilots are instrumental in funding CCP and Eve Online. From my admittedly anecdotal experience, I think most of these paying customers are no hardcore PVP players or pirates, but peaceful miners and mission runners, carebears and newbies. 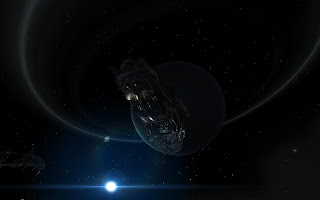 Yet the gameplay of Eve Online doesn't do these people many favours. Rather, it's the other way around. Especially newer pilots, mining or running PVE missions in their n00b ships, often fall prey to more experienced griefer players who know enough about the rules to trick the unexperieced into an unfair fight which the newbie is certain to lose. Carebear corporations, newbie corps, miners and such are a regular and easy prey for pirate corps who regularly - and often for the sheer fun of bashing weaker players - declare war on them. There's nothing you can do about such a wardec; the gameplay allows any corp to declare war (wardec) any other, as long as the wardeccing corp pays the necessary fees. For the wardecced corps, if you're not an experienced PVP corps, it often means either don't play EVE until the war is over ('dock and turtle') or run the risk of losing your ship and your expensive implants. Wars can last weeks; recently while I was on holiday, many of my corp mates lost almost a months' worth of playing time due to a series of wardecs.

I understand that this is part of the game. This is New Eden, it's a harsh environment, but still I don't understand why CCP continues to keep it this way. I have known a lot of trial accounts who chose not to become paying customers, and I know of (formerly!) paying accounts who refuse to ever set foot in Eve again after being harassed, griefed or wardecced one too many times. After all, why should I pay 15 dollars a month, only to be forced to dock and turtle almost the entire month, or to allow some griefer jerk to blow me to pieces? Not my idea of fun, really. When I just started out in Eve, I almost quit over such an incident, and if I hadn't found a good corp at that moment, I would certainly have quit indeed.

CCP loses money in cancelled subscriptions or lack of trial account retention, due to the fact that they allow pirates and griefers to harass (especially) less experienced players and corps in highsec. Yet it also seems that highsec is the region with the largest population of paying customers! These miners, pve mission runners and their corps, they just hang in there, and when they quit, their numbers get replenished with new players time and time again, despite the (CCP blessed) efforts to have them harassed, wardecced and griefed out of New Eden. They are many, but they could have been more, if CCP had wanted them to be; if CCP had given them a bit more protection.

I'm obviously not advocating a radical overhaul of Eve's gameplay. But, some added protection (in for instance the 0.8 to 1.0 regions of highsec, or in the first months of being a pilot) for certain categories of players against can baiters, flippers, griefers, or some recourse for corps against serial wardeccing pirate corps could be beneficial to player retention and thus to CCP's bottom line and Eve's long term prospects.
at 19:42 11 comments:
Email ThisBlogThis!Share to TwitterShare to FacebookShare to Pinterest
Newer Posts Older Posts Home
Subscribe to: Posts (Atom)