Today marks a special occassion: for the first time, my wallet contains more than one billion ISK. I'm a regular weekend billionaire, me! Of course I know there are traders, miners and such who make much more, but for a casual mission runner, it's not bad. Furthermore, it's more than the average Eve pilot has, according to the Q2 quarterly Economic Newsletter, which said the average Eve pilot has roughly something like 300 to 450 million ISK in cash.

Of course, now that I have this much ISK, I need to consider my options. Buying new ships? Rigs? Skills?

Speaking of which: I am now over 16 million skillpoints, as I completed Armor Compensation Explosive level 5 today. It was the last armor compensation skill I needed, I have all of them up to level 5 now. It seems I'm done learning the basic armor skills, as the certification system awarded me the Elite Armor Tanking certificate. Next up: shield skills! Currently working on shield management level 5, but that will take another 11 days.
at 20:47 1 comment:
Email ThisBlogThis!Share to TwitterShare to FacebookShare to Pinterest

Eve Online: A look at Dominion

After seeing the Dominion trailer at CK's, I thought I'd take a look at it myself. You can already get a preview on Eve Online's test environment, codenamed 'Singularity', even though the Dominion expansion is still a month away. Getting online was easy, using these excellent instructions by Cyleus Taestar, and so (after a bit of tinkering with directories, files, shortcuts and a 479 MB upgrade) I found myself flying through New Eden Dominion style. I must say I'm impressed by some of the art work on the planets and moons! Behold: 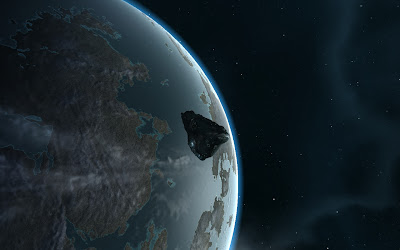 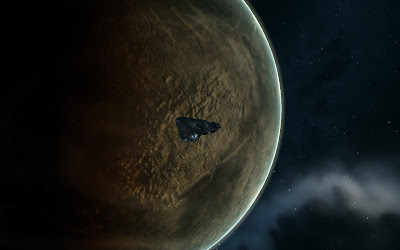 Some of the moons look very natural, almost like a reworked picture of our own moon. 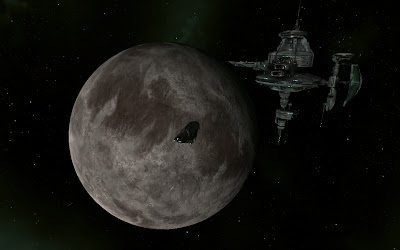 Of course there's also the Gas Giants. We have those planets too, in our own solar system, and they often look a bit bland, as pictures of Saturn and Neptune show. New Eden's gas giants are true to nature in this regard, but that makes them a bit less attractive to see as well. Our own Jupiter is more colorful, and to my taste the New Eden gaseous planets that I have seen (only a few!) could have had a bit more 'Jupiter' in them. 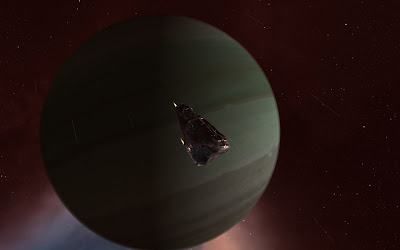 By the way: all planets revolve naturally and on some of them I spotted thunderstorms.

New Eden's background skies, often consisting of nebulae and stars, also seemed to have undergone an upgrade but not as dramatic as the planets and moons.

Of course Dominion is more than just this artwork update, but so far I like what I've seen. I will definitely spend more time on Singularity in the coming weeks, if only to explore the New Eden we'll all get to see when Dominion is released.

-update- Added more snapshots to my Koinup Eve Online group.
at 21:13 3 comments:
Email ThisBlogThis!Share to TwitterShare to FacebookShare to Pinterest 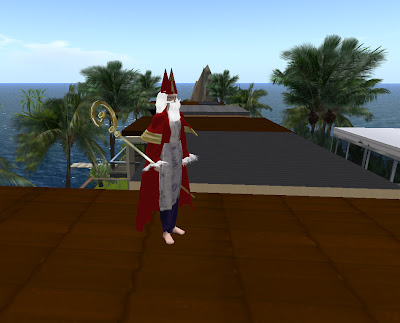 Sinterklaas, the supposedly Spanish bishop Saint Nicholas dearly loved by every Dutch child, has arrived in the port of Schiedam earlier today, with his steamboat full of gifts for all wellbehaved children. He is of course accompanied by his trusted helpers, the Zwarte Pieten! In the coming weeks, Sinterklaas (often called 'Sint') and his helpers will spread presents and candy throughout The Netherlands. Sint rides his white horse over the roofs and houses, while his helpers deliver the good stuff: kids put their shoes by the chimney, and Zwarte Piet is supposed to climb down and put candy or small presents in them. Often kids will leave something nice for Sinterklaas' horse in return: a bit of water and a carrot or a sugar lump for instance.

On the evening of December 5th, Sinterklaas Evening is celebrated, with giving larger presents (both to kids and grownups), seasonal candy (chocolate letters!) and such. Often the extended family is involved, and a typical feature of this evening is, that the grownups write silly poems to go with the gifts. First you read the poem, in which someone usually sets you straight, teases you or mildy vents some frustrations; only after that you are allowed to open the present. Soon after December 5th, Sint leaves the country only to return mid November next year, when the whole ritual begins anew.

This children's feast is a real national tradition and has been celebrated in The Netherlands for hundreds of years. It (more or less) marks the start of the winter and to a lesser extend the christmas season over here. Our 'Sinterklaas' may also have been a source of inspiration for the American Santa Claus!
at 00:21 No comments:
Email ThisBlogThis!Share to TwitterShare to FacebookShare to Pinterest 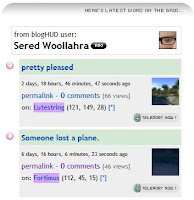 The very first post on this blog, dated july 2nd 2007, is about me trying out BlogHUD, Koz Farina's blogging tool from within SL. I have been using it ever since, on and off. Looking back at my own BlogHUD archive, I wondered how many snapshots and blog entries there are at BlogHUD, and so I went to find the very first post. It took some effort, but as I write this, the oldest surviving post is on page 2731. It is 174 weeks, 2 days and 22 hours old!

Given that BlogHUD currently has 2731 archive pages, and that there are ten entries per page on them, there should be over 27.000 entries in Koz Farina's database. That is an astounding collection of chronologically ordered text and images in one place. It's a tremendous timeline! Browsing through it, familiar names and places drift by, some of them long gone, others still active. It's like a history book of Second Life, one I'm glad to be part of. I'll make sure to keep contributing, too!
at 15:40 No comments:
Email ThisBlogThis!Share to TwitterShare to FacebookShare to Pinterest

Last night I was standing on a tower in Lutestring, looking in the direction of Timandra and Promissa and wondered how the view would be if I cranked up all my graphics settings to the max. After I did that, I waited for a few minutes for the view to fully rez, and here's the result: 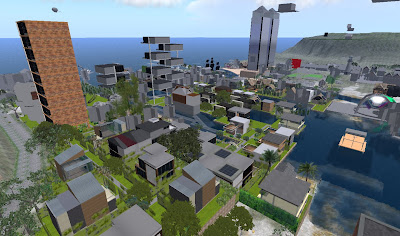 These are generally residential sims, but the great variety in Second Life shows here as well. Towers, houses, water, mountains, beaches, clubs, a pirate ship, offices: it's all there. Too bad there's a 512 meter view range limit!

I'm going to do this again from another PC with a more powerful graphics card, see if the results get better.
at 08:37 No comments:
Email ThisBlogThis!Share to TwitterShare to FacebookShare to Pinterest 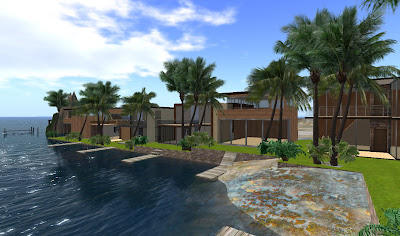 Yesterday, Tropical Beach Rentals' Zena and Ronon prepared my new rentals in Lutestring. It's a nice bay, and so we decided to call it 'Lute Harbour'. I'm quite happy with the way they turned out! Hopefully tenants will like them too; occupancy is important, after all.

Speaking of which: my rentals are still doing relatively well. A month ago, we saw a serious drop in occupancy, but it seems to have been an incident and not a trend, as occupancy rates quickly rebounded to their usual, higher levels. Financially speaking this means I'm earning, but not much, just the tier with a few dollars margin. With Lute Harbour however, I have gone up in tier, and it will take a while before it's all rented, so it remains to be seen whether the coming months will be profitable at all. But, of course, that's the business risk I'll have to accept!
at 21:34 No comments:
Email ThisBlogThis!Share to TwitterShare to FacebookShare to Pinterest

Through the gates of time

I still remember it clearly. I was a teenager, sitting on the couch at home watching TV: a report from Berlin, where, much to my amazement, people were breaking through the infamous Berlin wall. Confused border guards, people hacking away at the wall with large hammers, a tremendous outpour of joy and tears. People hugging and crying, the Brandenburer Tor. Mass parties, freedom! I may have been young then, but I knew I was watching history unfold itself before my eyes. I had been behind the Iron Curtain one time and it frightened me; but now it was gone.

Today I'm looking back at the Berlin Wall, in Twinity Berlin. Throughout Twinity Berlin, there are gates through which you can step back in time, and enter the Berlin that still has a wall, where stern looking officers stand guard under flags with communist symbols. Now you're in Berlin 2009, the next moment you're back in 1989.. The gates are created of appropriately grim concrete, as you can see.

Here I am, standing near checkpoint Charlie, 2009: 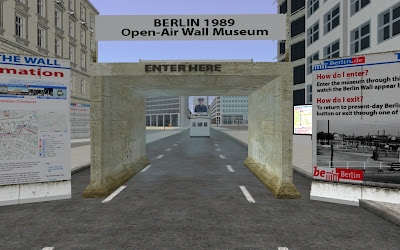 A few steps ahead, and suddenly.. 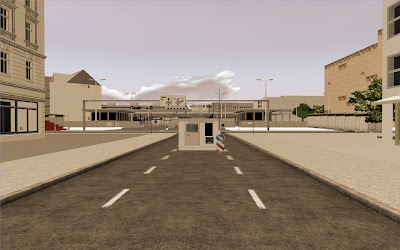 I am very much impressed with what Metaversum has done here. Some of the images are familiar, and being born during the cold war, they still evoke emotions, even though I'm not German. Do yourself a favor, install Twinity and pay a visit to Twinity Berlin, even if it's only to take a look at the Wall - in a way you'll never be able to in real life. I have uploaded some pictures here at Koinup.

Apart from the whole Berlin Wall 20 years anniversary thing, this is a fantastic way of presenting history. Imagine stepping through a small gate somewhere in London, and ending up at exactly the same spot, but in Medieval times? Or a gate in Singapore, which brings you to the city as it was in World War II? What a great way to show and teach history! Athens in the time of Pericles; the Forum Romanum in Rome in the first century AD; or even Amsterdam during the Dutch Golden Age. Let's hope Metaversum gets to do some of these. What city or history would you like to see recreated?
at 13:12 No comments:
Email ThisBlogThis!Share to TwitterShare to FacebookShare to Pinterest 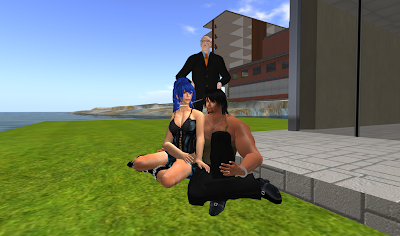 I caught up with Zena Silverstar and Ronon Carver of Tropical Beach Rentals, while they were preparing our new rental project in Lutestring: Lute Harbour. They were clearly afk, but sitting nicely on a poseball, so I took the opportunity to take a team picture :)
at 23:03 No comments:
Email ThisBlogThis!Share to TwitterShare to FacebookShare to Pinterest
Newer Posts Older Posts Home
Subscribe to: Posts (Atom)