Yesterday I decided I wanted to see the Singapore harbour in Twinity, so I walked from the city center towards the straits. Apparently not many people make it to the edge of the city yet, as my exploration even warranted some attention from Metaversum. Tonight I wondered: what if I went even further away from Singapore's city center? Would I eventually encounter a border or an edge, or would the world simply cease to exist at a certain point? And so I went on for a while - and there it was, the edge of the Twinity world! 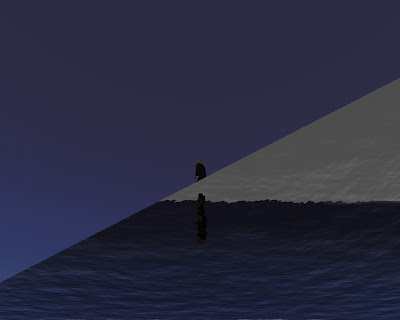 This really is the place where the unfinished seams of Singapore become visible, and the visual effects are quite interesting. 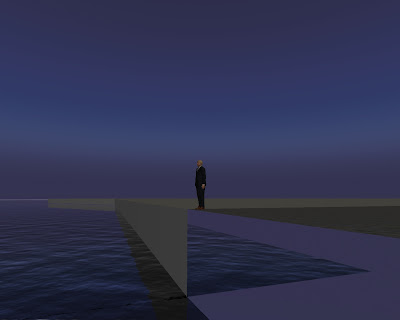 But perhaps the most beautiful sight was this unfinished freeway, extending over the Singapore straits, in the dark blue glow of the night sky with the gentle waves of the straits below it. 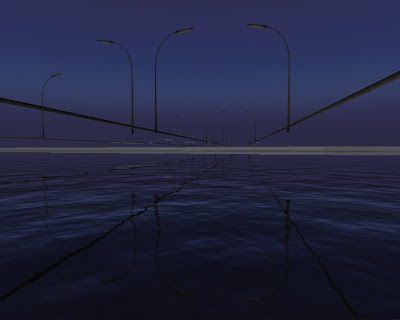 The rest of tonight's snapshots can be found at koinup, as usual.
at 01:08 No comments:
Email ThisBlogThis!Share to TwitterShare to FacebookShare to Pinterest

Finally, I am able to visit Twinity again. The latest ATI patches seem to have fixed issues I had; CPU usage is now workable, even though Twinity still uses a lot of resources. I took the opportunity to take a walk through Singapore to the port near Raffles Avenue, where I cooled my tired feet in the harbour water.. 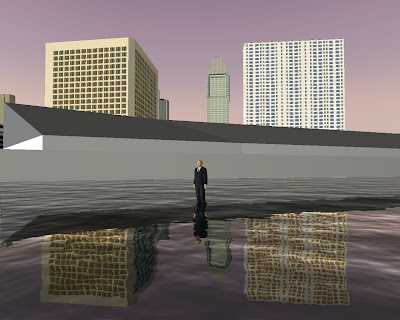 Even though Singapore is not finished yet, it's nice to be able to visit a new city in Twinity.

More Twinity visuals can be found at Koinup!
at 00:43 No comments:
Email ThisBlogThis!Share to TwitterShare to FacebookShare to Pinterest

Many of Eve Online's pilots enjoy doing stuff together. Mining, missions or operations: it's often done with corp mates, alliance members or friends, which makes it a lot more enjoyable. Yesterday, an ad hoc team of four Alien Ship Builders did a couple of level 4 missions: Angel Extravaganza and Mordus Headhunters. Given the huge amounts of damage (dps) we could inflict and absorb (tank), neither of these missions proved to be much of a problem.

Yet, at one point during Mordus Headhunters I ran into trouble. I drew much of the aggro of the second pockets, meaning I had dozens of enemy ships firing at me at point blank range. My setup wasn't really prepared for those amounts of dps as I had only one armor repair unit fitted, and after a while I had to warp out to repair my ship. On the snapshot below, which you can click for a larger view, my shields are half gone, but my armor is still intact: 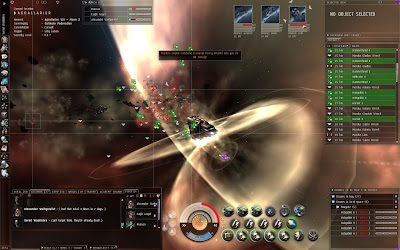 The reason I had left so ill prepared: I was running a relatively easy level3 mission solo, when we decided to run the level4's together. Without changing my fittings I jumped in, when in hindsight I should have adapted to the new, more demanding circumstances!

In the end, nothing was lost; the three others were more than capable to handle the incoming fire thrown at them. We completed the missions and cashed the rewards; in total, with the level3 and a few sales combined, I earned almost 30 million ISK yesterday.
at 21:01 No comments:
Email ThisBlogThis!Share to TwitterShare to FacebookShare to Pinterest

Today brought us the news that CCP, the creators of Eve Online, will bring a new console only MMO to the market, called 'Dust 514'. The funny thing is: Dust 514 is situated on the planets of the very same EVE Online universe, New Eden, we already know! Both EVE Online's space bound pilots and Dust 514's planet dwelling fighters will play a role in the story that unfolds in New Eden. According to CCP, this is "one universe, one war", and they hope the Eve Online and Dust 514 communities will merge together over time. After reading a few news reports I have a few quick questions and remarks about Dust 514.

First off, Dust 514 is an FPS, meaning the players will be walking avatars - something still missing from Eve Online. Called 'ambulation' or 'walking in stations' we have been waiting for this for quite some time, but so far this hasn't materialised. Could Dust 514 be the precursor to ambulation? If Eve and Dust 514 players are ever to meet in game, both need a real avatar. Besides, the Dust 514 snapshot below - provided by CCP - shows a command pit, floating in space above the planet, not built on it. This is clearly ambulation, but of course it could be only for Dust 514 players. 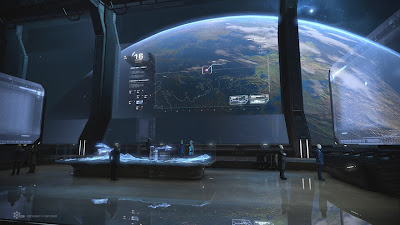 Will an EVE pilot be able to participate in fights on the planets? Could EVE spaceships affect battles by bombing enemy Dust 514 players or by providing logistical services to his own Dust 514 mercs? Could an EVE pilot 'beam down' to pick up a gun and join the fight on the planet? And if he survives, could he then take his Dust 514 buddies back up to the station for a drink at the bar? Again, without ambulation this is impossible, but there's certainly a very interesting perspective for future expansions. Although, given that Dust 514 is a console game, I don't know whether it's technically feasible for CCP to provide such a mixed environment within the current implementation of New Eden.

Second: the changes to sovereignty in 0.0 (nullsec) space. Currently, an alliance can claim sovereignty over regions of 0.0 space by placing and maintaining player owned space stations (POS'es) there. In the future, Dust 514 players get to play a role in this mechanism too, as owning stations isn't going to be enough to maintain sovereignty. You'll need Dust 514 mercenaries on the ground, on the planets, to conquer those for you as well. This may have significant impact on the balances of power and the politics of New Eden. I wonder how the big space holding 0.0 alliances think about this sudden change to the playing field.

And the existing EVE pilots? If you're a highsec PVE player or miner, it doesn't look like your daily game experience will change much, as the sov changes only affect nullsec. Also, with Dust 514, CCP is aiming for a different audience: the existing pilots can stay in space, CCP wants new FPS players for Dust 514 combat! IF CCP succeeds, the number of gamers active within New Eden will continue to grow (or grow even harder), which is a good thing for CCP and hence for all of us who like to spend time in New Eden.
at 20:13 No comments:
Email ThisBlogThis!Share to TwitterShare to FacebookShare to Pinterest

Today I created a second island at my OpenSim location: 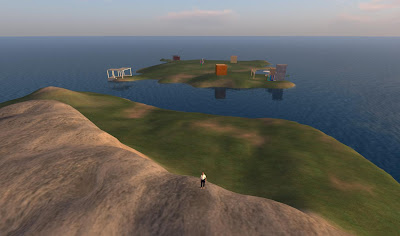 It's not that spectacular; it's just one of the default islands available for download in the Second Life knowledge base. But it's good enough for my purposes, here. I think I'll ask the kids to turn this into a park or tropical island, instead of an ordinary residential area. I wonder if they are up to it!
at 20:23 No comments:
Email ThisBlogThis!Share to TwitterShare to FacebookShare to Pinterest

The new OpenSim server I created last week, has seen a lot of action in the past few days. My kids and a few nieces living nearby, are busy building annd furnishing houses. They have discovered how to work with textures, too! At first they noticed that screenshots could be saved to inventory, and they started using them as textures. After that I showed my daughter how to upload pictures found on the internet or local hard drive, and now they are creating tv's, laptops and stuff like that. They are learning fast, and I am, frankly, quite amazed at some of their work.

This nice bar is built by my eight year old niece: 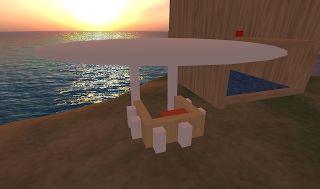 My almost-ten-years-old daughter framed a tv in her new house - but also some popcorn to go with a movie: 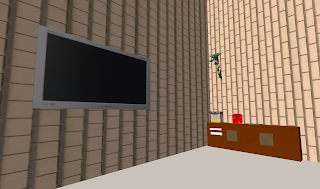 And this is perhaps the most promising build, a beach house, still under development. This one is made by my fourteen year old niece, who's very much into interior design, and I'm quite eager to see what she's going to do with this nice place! 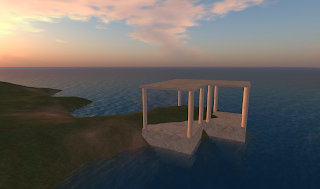 More pictures are available at my Koinup stream.
at 20:37 No comments:
Email ThisBlogThis!Share to TwitterShare to FacebookShare to Pinterest

OpenSim up and running 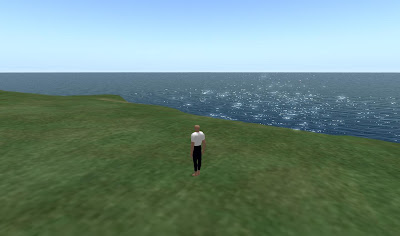 After trying again and again to get OpenSim running on CentOS 5 64bits, and persistently failing at it, I finally surrendered and installed in on Windows XP. I had an old Dell PC standing idly in a corner; downloading OpenSim and installing it was a breeze. Configuring MySQL wasn't much of an issue either; only a network issue and some tricky configurations in OpenSim.ini gave me some headaches. In the end, I got it up and running in a few hours - not bad. The kids are going to be happy tomorrow!
at 22:58 No comments:
Email ThisBlogThis!Share to TwitterShare to FacebookShare to Pinterest

One of the advantages of Eve Online's skill training system, is that training continues even if you're offline, for instance when you're on holiday. Of course you'll have to start training a skill that takes long enough, but there's plenty of those. I had several skills I could train to level 5 (the highest skill level) and that would take 22 days; longer than my holiday was! After careful deliberation, I choose to train Drone Interfacing level 5, giving me 20% extra drone damage. A translation for you non EVE playing readers: in space, I can use up to five drones that will inflict damage on the targets I direct them to. This means a lot of firepower, and many enemies rightfully fear the damage a swarm of drones can do, especially if their owners are well trained - as I am now. So, today, upon returning to Eve Online, I was quite happy to see the notification: "Skill training completed. Sered Woollahra has finished learning Drone Interfacing V." Twentytwo days of training, but it's worth every day of it!
at 22:22 No comments:
Email ThisBlogThis!Share to TwitterShare to FacebookShare to Pinterest
Newer Posts Older Posts Home
Subscribe to: Posts (Atom)