Back when I started this blog, my main focus in the area of virtual worlds was business usage. IBM was experimenting with Second Life and as an IBM business partner, my then employer asked me to keep an eye on what IBM was doing. Over the years my focus has shifted a bit, but the business usage of virtual worlds is still interesting stuff and there are still plenty people believing in it. Linden Labs, anyway, still does: in a few days, they will launch their 'SL behind the firewall' offering Nebraska.

"Mark Kingdon, CEO of Linden Lab, will unveil “Nebraska”, a stand-alone solution based on the technology that runs the popular Second Life virtual world. “Nebraska” is the much-anticipated behind-the-firewall solution which will allow enterprise to host their own virtual world environments within their organizations."

Kindon will unveil Nebraska at a Metanomics conference which promises to be one of the most interesting events of the year.

I'm sure I'm not the first one to talk about OpenSim vs Nebraska, but here's a few thougts. From an OpenSim point of view, Nebraska is a validation of it's existence: yes, there is a need and market for a standalone simulator. At the same time, Nebraska might be a threat to a part of OpenSim's marketshare, as companies might be sensitive to the fact that Nebraska is a corporate offering from an established company with a formal support organisation behind it, and not just something built by a bunch of hobbyists. Shortsighted? Perhaps, but this has been mentioned to me at least twice when talking about OpenSim!

From a technical point of view I'm interested in the security aspects of it. Does it require a separate directory server or can it use an existing LDAP server? Or MS Active Directory? Does it use encrypted network connections?

Interoperability is also an issue. Can I create a grid of Nebraska sims, and can I join that to OpenSim as well? How is content shared between Nebraska sims? Perhaps these issues are covered elsewhere already - I've been too busy with rl stuff to really read up on Nebraska!

Anyway, as an owner of an OpenSim, I'd like to test Nebraska as well, but I'm not sure we'll get the chance..
at 12:48 No comments:
Email ThisBlogThis!Share to TwitterShare to FacebookShare to Pinterest 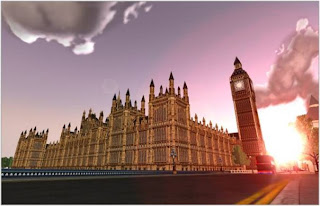 After Berlin and more recently Singapore, Twinity is about to grow again: the first snapshots of Twinity's virtual rendering of London have appeared on Facebook. From the accompanying press release I gather that London isn't finished yet, as Metaversum is looking for creative people to set up shop in virtual London.

That request kind of surprised me. Twinity aims to be a mirror world: a virtual world that mimicks the real world as closely as possible. Yet, Metaversum is looking for people to create new shops, businesses, art galleries and the like in their virtual London, and apparently these will be entirely new instead of mirrored from the real world. I wonder if this means Metaversum is changing their philosophy in this regard.

I'm really looking forward to visiting London in Twinity. I have never been in the real Berlin or Singapore, so I can't compare the Twinity experience with the real thing. I have however visited the real London, so this is the first time I'll visit a Twinity city I am somewhat familiar with in real life too.
at 13:34 No comments:
Email ThisBlogThis!Share to TwitterShare to FacebookShare to Pinterest 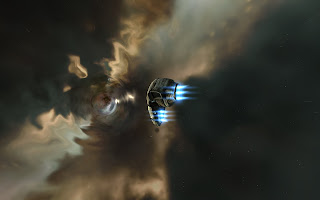 Things are about to change! Our corp is making plans to anchor a player owned station in a nice and suitable class II wormhole we recently located. Of course we'll have to invest a bit, but the return on investment is said to be very good, as all sorts of interesting and profitable 0.0 minerals can be mined there.

To be honest, I have mixed feelings about this move. I've been running missions in Verge Vendor for months now, and I'm still enjoying myself. The missions aren't that hard anymore; I can usually salvage and chat with corp members while my drones do most of the hard work. A bit of casual play, nice and relaxing! And yet, while I still enjoy it, it's becoming a bit too predictive and perhaps even tedious. And, those ninja salvagers are becoming a pest in the systems I usually operate; why provide these lazy bastards with more opportunities to salvage my wrecks? Perhaps I really do need a change of scenery and action!

But there are a few drawbacks. I've been flying a largely T2 fitted armor tanking Dominix battleship for a while and I like it, especially for it's huge drone space. However, if we move into the wormhole, I probably won't be able to bring the Domi; it's mass would probably collapse the entry to the wormhole right behind me. So what ship to bring instead? I don't know yet.

Partly that's also because I'm not sure what I'll be doing in the wormhole. My corp mates are mostly miners, going after the precious ores, but I'm not one of them. Of course the miners would need some protection in the lawless wormhole space, so perhaps I could patrol the area to protect my corp mates, but that doesn't look like a casual player task to me. Sleeper hunting could be nice, but to be effective I'd have to invest in some scanning skills. Uncertainties abound!

I really have no idea where I'll be in a few weeks and what I'll be doing, but it sure looks like the quiet mission running days are almost over. And perhaps that's a good thing.
at 12:39 No comments:
Email ThisBlogThis!Share to TwitterShare to FacebookShare to Pinterest

On top of Singapore

I used to be able to fly through Twinity, but when I didn't visit Twinity for a while, I forgot how. As it's an undocumented key combination, I couldn't find it anymore; I had to keep both feet on the floor. Luckily, after a tipoff from RC at the Twinity Monitor, I am now able to fly again, and here I am, enjoying the view over Singapore from the roof of Park Hotel Orchard, at Orchard Road! 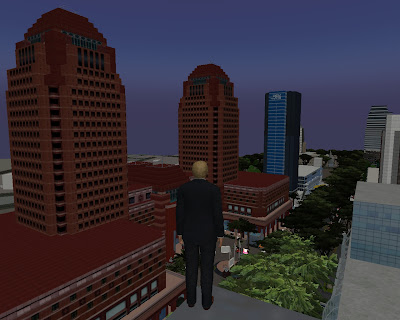 Used like this, you can view a city like you'll never be able - or willing - to in real life. 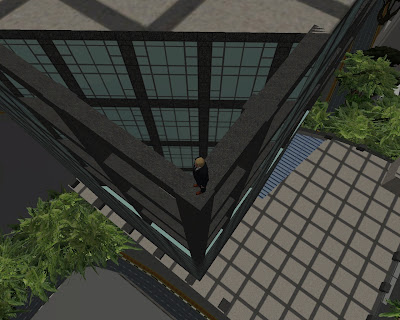 at 20:54 2 comments:
Email ThisBlogThis!Share to TwitterShare to FacebookShare to Pinterest

Mixed news from the rentals front 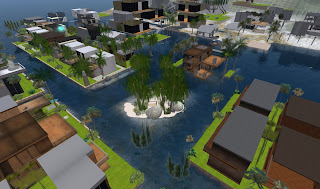 For years now we’ve been hearing bad news about the economy, but at the same time, my Second Life rentals have been doing fine. Each month, the rentals (some of them visible in this snapshot to the right) pay for the tier fee, and usually there’s a small surplus of a few US Dollars. Over the past year or so, this surplus slowly grew to a buffer large enough to pay for two months tier. When I got to that point, I decided to cash in those US Dollars, as I needed them elsewhere. In hindsight however, this may not have been such a good idea.

Yesterday I received a report from my land manager Zena Silverstar and her team at Tropical Beach Rentals, with some less than stellar news: the occupancy rates of some of the rentals suddenly and unexpectedly dropped considerably, at an unprecedented rate, over the past few weeks. A development we hadn’t experienced before! Tenants come and go all the time, and occupancy rates always vary a bit, but generally they stay well within a certain (profitable) bandwith and we didn't expect that to change so suddenly.

It took a while before a possible explanation was found: the occupancy drop occurred right after Zindra, the new SL 'adult' mainland, was opened. Could it be that people are moving off the regular mainland to Zindra as a permanent place to live? When asked, former long time tenants mentioned all kinds of small reasons to end their stay with us, but none of them mentioned the new adult continent ; perhaps they didn’t want to admit to moving there.

In the mean time however, occupancy has recovered a bit as rentals vacated by long term tenants are being occupied again by newcomers, and as far as I can tell my rentals are still profitable, albeit with a smaller than usual margin. Tropical Beach Rentals also expanded their staff, with support for tenants now available across a larger time frame of the day. Perhaps that helps too.
at 18:55 No comments:
Email ThisBlogThis!Share to TwitterShare to FacebookShare to Pinterest 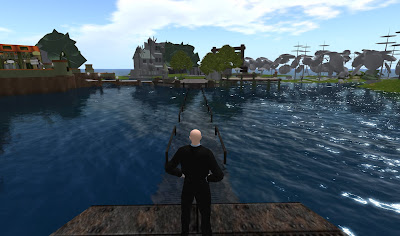 Walking across this submerged bridge will make my suit wet. But the water doesn't look too cold..
at 15:32 No comments:
Email ThisBlogThis!Share to TwitterShare to FacebookShare to Pinterest

Even though this blog post starts in Eve Online, it's also applicable to Second Life, Twinity and other environments. It's about the relative safety of being anonymous online.

I'm one of those Eve Online pilots who's trying to participate in corporate and alliance chat. Talking to corp mates and alliance friends adds a valuable social dimension to the game, and unless I'm busy with the mission or task at hand, I'm available for a bit of idle chat.

But it doesn't always have to be just a bit of chat. At times, I have ended up in quite personal and sometimes emotional conversations, usually about people experiencing all kinds of difficulty at home. Alcoholism, parental abuse, broken families, a bitter divorce, legal struggles with (usually) ex wives refusing a father to see his kids, financial issues - it's all there. And it's surprisingly close to the surface; sometimes it takes just one or two questions before someone pours their heart out. I've been, at times, taken aback by the painful stories, by the hurt that's hiding behind the screen names!

In an environment like Eve Online, it's not that difficult to hide your real life identity. This relative anonimity, coupled with a feeling of trust amongst corporation mates, will from time to time lead to this kind of confidential conversations. And though the circumstances may differ, I've also had encounters like these in Second Life.

I have said it before: these human interactions adds a value to MMO style games which I appreciate a lot. It would be a cold affair without it!
at 08:40 No comments:
Email ThisBlogThis!Share to TwitterShare to FacebookShare to Pinterest
Newer Posts Older Posts Home
Subscribe to: Posts (Atom)