Yesterday evening I logged in and immediately got invited to a fleet. I hopped in my Ishtar, joined up and we immediately moved out – destination as of yet unknown. I had a feeling it had to do with the ‘battle detected’ tweet that eve-kill had sent out and that turned out to be correct: as we burned through the southeast, it was clear we were going to Esoteria. We took a few jumpbridges – but not too much, have to manage jump fatigue! During our trip the fleet had grown to around 170 guys from The Kadeshi, Darkness., Gentlemens'.Club and Nulli Secunda. After a bit of travel we arrived one system out of destination where the main bulk of the fleet lingered on the gate for a while, already in quite a bit of tidi (time dilation). Our interceptors jumped into A-CJGE to recon the gate and provide ping spots for the fleet. Inties reported heavy tidi – 10% - and lots of dictors around. We waited for a bit, while our Inties did their work and our FC processed intel; the main fleet began killing some small Brave ships that had the bad fortune to land in the middle of a hundred hostile Ishtars. 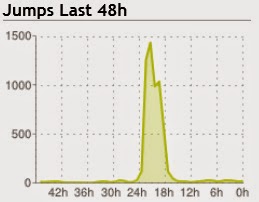 After a few minutes we got the green light: our FC had us jump into system.. and we jumped.. and we
jumped... slooowwwllyy… the FC was already giving orders on what to do next (‘Align, align, prop mods on, get that Sabre..’) when most of us were still in the jump tunnel! It took me a couple of minutes to get through and oh boy, tidi was indeed very bad on the other side. At 10% tidi Eve is barely moving! I applaud CCP’s efforts in this regard, the tidi system is much better than we used to have and it is at least a somewhat fair fight, but still – it’s not an optimal way to experience Eve. Given that this was an unscheduled fight, no notification had been sent to CCP so I assume we played on a normal node (i.e. regular Eve hardware) instead of a reinforced one which is used when a big fight is brewing somewhere. Anyway, with local sitting around 1350 pilots, tidi was really heavy and largely stuck at 10%.

Slowly we began to land on grid, align, turn prop mods on or off as per the FCs request and we began ‘hazing the dictors’ as the FC put it. But first: burn out of the bubbles, warp to that ping above the bubbles, warp back to the FC and anchor! Well, by the time I had completed that maneuver in this heavy tidi, most of the CFC Sabres were destroyed, but I was able to get on a Broadsword kill. By the time the Broadsword died, I noticed that I was in a bubble and quite a bit away from the main Ishtar fleet.. though I followed FC orders earlier: warp to him, drop drones and orbit your own drones at short range. No idea why I had gotten so far away from the rest! Perhaps the warp in had been off, due to tidi? Anyway, again I had to burn, align, warp out and warp in.. When I landed this time, the dictor slaughter had all but finished. A tasty snack, but now it was time for the main course: the big fight we had come for.

I had no idea what we were fighting over to be honest, I was just here for the fun. From what I’ve been told afterwards, there was a relatively small fight over a POS between Nulli Secunda (S2N) and some Russians. S2N escalated with supers; the Russians escalated by bringing in their allies, the CFC. This meant that everyone and their dog had fleets burning towards the deep south, the Russians and the CFC lured by the promise of possible Super kills, the N3 bloc driven by the urge to save said supers - and have a good fight.

When we landed at the place of the main battle I was happy that I had 'all brackets disabled’ and a dedicated overview tab that shows hostiles only. This meant missing a lot of visual information, but I think the amount of ships and stuff visible on grid would have been too overwhelming! With an ever growing number of pilots on grid – local topped out at 1704 according to one of my fleet mates – it would not have been possible to make sense of the mess. Well, for me at least.. it gets blurry. At those moments, a good FC is crucial, and ours did a very fine job: he remained calm throughout the whole encounter. Fleet comms remained disciplined too and methodically, calmly, we began shooting enemy battleships. 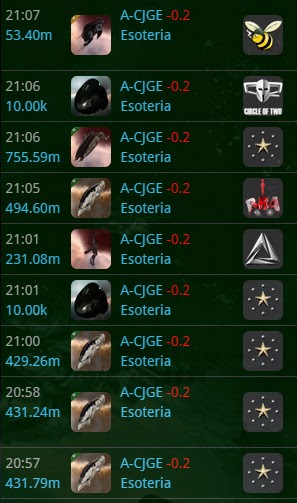 Apocalypse Navy Issues died one after another; then a Tempest, then a Machariel. Sometimes it took
ages to lock something, and then it would take a long time again for my drone damage to apply, but my drones were hitting and enemy ships were exploding. The alpha volley of a full Ishtar fleet is powerful! If you aren’t receiving reps soon after being targeted, your ship will almost certainly explode. I was enjoying myself at this stage, just very focused on getting those targets locked and applying as much damage as possible. And then,  all over sudden it seemed a hostile Machariel fleet landed right on top of us! We didn't panic but I definitely heard some tension in the voices on TS: 'FC, hostile battleship fleet landing on us.' Fortunately it was just tidi wreaking havoc on our overviews: the Mach fleet just passed us by, very slowly, as they warped out!

During all this, we were bombed several times, but due to excellent fleet warping by the FC, we didn’t lose any ships. Of course we lost drones, which always sucks, so when a blue fleet accidentally bombed us we made sure to ‘thank them’ in local. We did lose some ships to other hostile fire: a fleet booster and some Ishtars. Just like us, the hostiles had a strong alpha volley so here too it applied: if you aren’t asking for reps as soon as you’re targeted, you die. But given that we had 170 guys in fleet, losing 5 or 6 ships really isn’t that bad! Or logis were doing a terrific job of keeping us alive, while we killed a handful of their Oneiroses.

And then, local began to drop a bit. The fact that the Machariels had warped out was a first sign that the main battle was over; it seemed the Supers had gotten out - something I didn't see at all. At one point there had apparently been 32 on grid, someone told me, but I didn't see a single one of them: too focused on doing the job! But by this time, apart from some closing skirmishes on grid, the big fight was indeed over. Lots and lots of ships died on both sides, but N3 succeeded in achieving their target: saving the Supers.

What is kind of funny: all those fleets have to move out again! I guess they would usually have taken a cyno out but in this new era of Eve, most of the fleets are doing actual gate travel. Perhaps not all the way, but certainly a large part. The result is that for many jumps out of A-CGJE,  tidi remained bad and pvp incidents continued to happen: we lost a logi due to an unfortunate wrong warp to a camped gate, our interceptors killed some stragglers here and there, while the main fleet tried to catch up with a Circle of Two Zealot fleet that was slightly ahead of us. The AHACS wouldn't play - but we got one of their Deimoses at a gate nonetheless.

All in all, I think all participants had a good fight. No large objectives were achieved but there was a lot of content - a good old fashioned Eve slugfest. A battle report shows over 2000 participants, 560 ship losses for a total of around 65 billion ISK. That br might not be entirely correct; it wasn't really a two way fight! But at least it has some handy stats concerning what happened.

And you know what also survived..? The node A-CJGE was running on: Eve didn't crash!
at 19:57 1 comment:
Email ThisBlogThis!Share to TwitterShare to FacebookShare to Pinterest
Newer Posts Older Posts Home
Subscribe to: Posts (Atom)