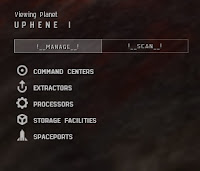 Yesterday evening, our alliance spent some time on the Eve Online test system Singularity to explore the upcoming feature Planetary Interaction. When the next Eve expansion, Tyrannis, is released in a few weeks time, planets will become an exploitable resource, containing all sorts of ore and raw materials, to be used in building goods. It's not yet clear what those goods will be, but stuff like POS fuel and skill books have been mentioned. Here's a short summary of what we learned yesterday.

Read more »
at 09:22 3 comments:
Email ThisBlogThis!Share to TwitterShare to FacebookShare to Pinterest

With the release of the Dominion expansion in 2009, the planets of New Eden got a facelift. The next expansion, Tyrannis (eta may 2010) will turn them into valuable sources of raw materials, to be mined from space. And the new game Dust 514 will bring mercenaries to their surface, probably to fight over the installations and resources belonging to Eve pilots. For now I'll contend myself with a few snapshots every now and then.

Idly drifting near a planets' ring. The planet casts a shadow over the thin rings; you can even see the stars through them.

Come Tyrannis, the next Eve Online expansion, this planet may become a rich resource for the miners of New Eden. And come Dust 514, CCP's new game set in the same universe, it may even become the scene of fierce fights between Dust 514 mercenaries. But today, seen from space, it just looks inhospitable and cold.

This planet made me think of our own planet Mars. It probably doesn't have an atmosphere; it looks like it's been dead for a long while.
at 21:31 No comments:
Email ThisBlogThis!Share to TwitterShare to FacebookShare to Pinterest

Eve Online: what's in my hangar 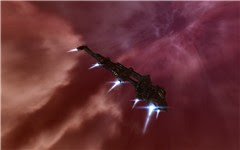 Eve Online pilots sometimes spend a lot of time to find the precise ship and fitting they need for a certain job, and as there are a lot of different jobs, most pilots tend to have a lot of ships. So Rixx Javix at Eveoaganda asks: what ships are in your hangar, and how are they named?

Looking around in my hangar I see a nice stack of Gallente ships: Incursus frigate (for doing small incursions into lowsec), a Helios covops (same), a Catalyst Destroyer used for running plexes, a Vexor cruiser (same), a Brutix battlecruiser for low level missions, and two battleships: the Dominix droneboat and the Megathron. And an Iteron mark III. Oh and the Zephyr of course! I once bought a Drake but it got destroyed at a lowsec gatecamp and I didn't buy a new one - yet.

My ships are all named after Dutch WWII era naval ships, such as the Flores and Soemba, who earned the nickname 'Terrible Twins from the British:

"Another British officer said: "These Dutchmen have the right fighting spirit. Nothing will stop them, and they won't cease firing. The only rest they had during the nights of unceasing bombardments was when they ran out of ammunition, and then they returned, reshelled and refuelled, and were off again. They will take on anything. [...] We could not make out where the firing came from until someone said 'It 's those damned Dutchmen again; you can't keep them out of anything!' And he was right."

I have attempted to find fitting names for each ship, meaning the Iteron is named after a freighter, the Dominix after one of our primitive aircraft carriers, the Incursus after a frigate etcetera. I like a sense of history and think such a naming scheme fits Eve Online just fine.
at 11:46 No comments:
Email ThisBlogThis!Share to TwitterShare to FacebookShare to Pinterest
Newer Posts Older Posts Home
Subscribe to: Posts (Atom)