For me, one of the most interesting aspects of virtual worlds is the technology side. I'm a systems administrator myself, responsible for maintaining and optimizing an important internet application, and as such, I can appreciate the engineering efforts of my colleagues at Linden Labs, CCP et cetera. It's not an easy task to keep all those residents and pilots lag free and happy..

Linden Labs has long struggled with Second Life's performance. Over the years, there have been many improvements: as I am writing this, there are over 77.000 SL residents online, which is roughly about three times the number of concurrent residents usually seen in late 2006. And in those days, SL would crash if the number of active residents got near 30.000!

But today, it's CCP that I want to talk about. Eve Online (as Second Life, btw) is a single shard world, meaning all pilots inhabit the same instance of the virtual universe that is Eve Online. And some of solar systems put quite a strain on the servers! Take, for instance, Jita, the major trade hub of Eve Online, which is sometimes populated by 1000 pilots or more. Until recently, having that many pilots in local (in any one system) would mean intolerable lag, horrible performance and all the fun associated with it. Recently, however, CCP released a patch that drastically improved on that situation: bugs were fixed, code was refactored and a database index was added. It is now estimated that Jita can serve up to 1400 or perhaps even 1500 pilots. A considerable improvement!

CCP has published quite a detailed account of this effort on it's dev blog here. As an engineer, I really appreciate the level of detail they're willing to provide. If you're really into engineering efforts, you should read this one: debugging jita live is for real men, where CCP Atlas details how a critical bug was fixed on the Jita server - while the system was online. Quite an effort, and a good read for anyone involved in high availability internet application!
at 22:47 1 comment:
Email ThisBlogThis!Share to TwitterShare to FacebookShare to Pinterest

Immersiveness in the browser?

Last week, I watched the Gaikai demo featured on Massively and Slashdot. I came away quite impressed: it looked realistic, didn't make over the top claims and the speed of loading and playing MMO games like Eve Online and WoW looked decent as well. I immediately requested a beta signup, as did many others I suspect!

There is however one issue with Gaikai, that that is immersiveness. Some MMO games or virtual world environments are intended to be immersive: the intention is to immerse all your senses in the game or world you're visiting, creating an intense experience. That's why Twinity, Second Life and Eve Online for instance are best played in full screen mode: nothing of the host computer or operating system is visible on screen, to distract from the environment. From the demo, it isn't clear whether Gaikai can deliver that; I'm actually pretty sure they don't. This is not an issue for most games I suspect, but it should have a negative impact on the immersiveness of virtual worlds, as you can see in the snapshot below. 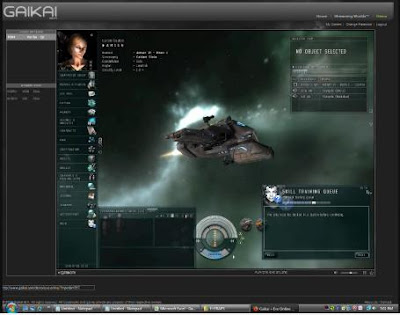 Still, if the price is right, I would sign up for the service. The ability to access my favorite virtual worlds and games from every PC that has Flash installed, is certainly appealing. Perhaps not as a primary means for real gameplay, but to do a bit of trade, to finalise a deal, to check in on in game communications, to add a skill to my Eve Online skillqueue, Gaikai may still be very useful.
at 07:56 No comments:
Email ThisBlogThis!Share to TwitterShare to FacebookShare to Pinterest
Newer Posts Older Posts Home
Subscribe to: Posts (Atom)