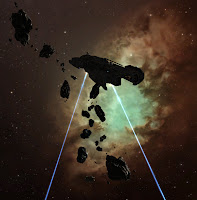 For a while now, we are seeing a passionate debate on the future direction of Eve Online. Everyone seems to be convinced something has to change: a rebalancing seems to be in order for several areas of Eve Online.
Yet, your perspective on what should change and how it should be changed, probably depends on your main source of income or your preferred play style. For instance, some nullsec dwellers say highsec is too safe and profitable, and should be nerfed. But other (overly paranoid) highsec pilots claim CCP is in a secret cabal with nullsec overlords and that this will prevent an 'obviously much needed' buff to security in highsec.
Some say industry belongs in nullsec, but what sensible megacorp would put its' production facilities in lawless outer regions? That would be akin to Volkswagen moving it's main factories to, say, Gilgit-Baltistan.. highly unlikely.  There's a lot of this armchair game design stuff going on: this should be adjusted and that should be moved, and Concord shouldn't do this or that anymore, and ganking should be encouraged or abolished, and..

I have to admit, I've been guilty of this myself: I too have written long blog posts proposing specific  changes to Eve. Yet I am feeling increasingly uneasy about some of that stuff I wrote myself and about suggestions I read from other players. But I couldn't really put my finger on why I felt like that, until I read this quote by Dee Hock:


Simple, clear purpose and principles give rise to complex, intelligent behavior. Complex rules and regulations give rise to simple and stupid behavior.

And that's it! Players often come up with tremendously complicated solutions to gameplay issues, usually designed to protect their own interests. But as the complexity of gameplay rules and regulations rises, people are more and more forced into following those rules and regulations like sheep. This, it seems to me, is definitely not what we want for New Eden. If you want emergent gameplay in the proverbial sandbox, overly complex rules and regulations should be avoided as much as possible. I think this Dee Hock quote, probably intended to describe business processes, perfectly  applies to game design intended to foster emergent gameplay.

CCP has announced Odyssey, the next expansion for the summer of 2013. It promises, amongst other things, "a rebalance of major areas of space from highsec to nullsec including changes in exploration sites, industrial resources, some types of NPC loot and more…" I'm eager to see whether those changes will be 'simple and clear in purpose and principle' or not.
at 20:10 No comments:
Email ThisBlogThis!Share to TwitterShare to FacebookShare to Pinterest
Newer Posts Older Posts Home
Subscribe to: Posts (Atom)