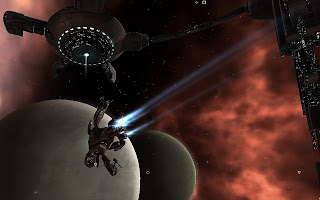 For years I rummaged around Gallente highsec, running missions and doing some smalltime trading, usually as a member of corps with the same group of pilots I’ve known for years. Finally, bored out of our skulls, a few of us created a new corp (No Fixed Abode - NOFAD) and joined Saints amongst Sinners alliance in Querious. For the first time I was part of a sovereignty holding nullsec alliance! With the plentiful beltrat bounties, the havens and the sanctums also came the CTA’s, gatecamps, roaming gangs and skirmishes. I scored my first solo pvp kill, got killed too and generally enjoyed it thoroughly. If there’s one thing I regret, is that I didn't do this earlier!

But all was not well. We were in Querious as IT renters, but, unbeknownst to us IT was on the verge of a failscade. Pretty soon it looked like IT wasn't able to repel the assaults directed at Fountain, and when IT needed more support, they upgraded us from renters to allies and gave us the entire constellation instead of just our home system B-7DFU. But for IT, it really was too late to turn the tide and it became clear we were on our own.

For a while, we were able to withstand the annoyances of Goon cloaky SB pilots (true, that wasn't the hard part) and the occassional roaming gang of reds. But when IT caved in, we soon encountered other enemies at our doorstep. We fought off Atlas. a few times - including their cap ships, I might add. We gate camped, scored kills, destroyed a number of SBU’s, but in the end we couldn’t withstand the combined pressure of –A-, Atlas. and Pandemic Legion. After we lost a few key battles, most of us evacuated our goods to either NPC nullsec or into Khanid and bade farewell to a part of New Eden that served us well.

For the past few weeks, –A-, Atlas. and PL have been duking it out in KFIE-Z, which is a dozen or so jumps away from our former home B-7DFU, and as long as PL has the ability to hotdrop –A-/Atlas. fleets in the region on a whim, I'm not sure someone else will claim sovereignty there. The -A- guys have had their butts kicked painfully, a few times, and I don’t see things changing in their favour anytime soon. In other words: unless Pandemic Legion gets curb stomped unexpectedly, it holds the keys to who’s going to have sov in our former home in Querious.

The impact of IT's once powerful cap fleets being able to move quickly throughout New Eden via their jump bridge network, has allowed them to project power across a large expanse of the cluster, more or less allowing us to find a nice and relatively safe spot under their protection. But when IT caved, the same mechanics allowed large enemy cap fleets to knock on our doors in no time. It still seems that holding sov in nullsec is a large alliances' game; you need the cap fleet and, preferrably, the backing of a large coalition if you want to establish a long term presence.

But then.. what is long term, in Eve Online nullsec? The biggest changes on the map have often happened in very short time frames, sometimes even overnight.. remember to pay that sov bill, guys!

So, as for Saints amongst Sinners: after a turbulent time in late 2010 and early 2011, we now find ourselves in a much different place. We are reorganizing in NPC nullsec, and will be preparing for a next stab at sov in nullsec. Stay tuned :)
at 20:43 No comments:
Email ThisBlogThis!Share to TwitterShare to FacebookShare to Pinterest

After the recent Eve Online: Incursion patches, I have had weird graphics effects on this laptop, which sports a ATI Mobility Radeon HD2300 GPU. It's not an impressive gpu, not by a longshot, but it's still supported for the current Eve client.

The first nuisance is this weird darkening issue with ATI cards on Windows 7. The solution is to upgrade to the latest Catalyst stuff, which I can't because it's not available for my hardware. Just my luck :)

The other issue concerns screenshots. If you press the printscreen button while in Eve, a snapshot is saved - by default as a .bmp in the C:\Users\username\Documents\EVE\capture\Screenshots directory. After the latest patch, there's some truly strange coloring in my screenshots:

The Windows photo viewer does not show these artefacts at all, but Picasa does. Uploading to Koinup didn't work either, this resulted in a format error: "the file you provided seems to be invalid". If I copy the picture to .jpg, the strange coloring is preserved:

Luckily, I am still able to get good copies of these snapshots, by opening them in Picasa and saving a copy, this time as a bitmap again:

Perhaps this is solved too, by installing that Catalyst 10.12 package, but first I need to find a way to get that to install on my laptop!
at 09:50 No comments:
Email ThisBlogThis!Share to TwitterShare to FacebookShare to Pinterest

By now, my alliance has been in the Querious region for quite a while, and we joined them there about four months ago. Much has happened since then! IT alliance is struggling to cope with a relentless assault, mounted by Goons and other enemies, and the political landscape of our part of New Eden could change at any moment. Who knows what will happen!

Only a few days ago, we expected a huge wave of reds (enemy pilots) to wash over us; we expected to die a violent death any moment. We defiantly braced for impact, preparing to 'go down in a blaze of glory', THIS IS SPARTA!, Alamo, and all that.

And then - nothing really happened. The last big battles in the region sort of petered out, and except for a few stealth bomber cowards and the incidental roaming gangs, no big red waves were spotted anywhere near our home. Perhaps it had already broken?

Our home in Querious - may it long be 'our house' indeed:

So here we are, mentally and physically prepared for battle. We don't know if the current quiet is just the quiet before the storm; perhaps the enemy is merely taking a breather before trying to wipe us out. Or perhaps they are too busy pursuing other goals, to worry about us. Things change fast out here, these days; todays' enemy may be tomorrows' ally, reds become blue and blues turn red..

For a recovering carebear like myself, this is a great time to be in Querious. You are continually challenged: deploy to here, station yourself there, patrol this system or camp that gate, get this ship fit.. There's no time to become stagnant, you have to adapt rapidly, and you don't know today what will happen tomorrow.

It's also a time where you have to decide whether you stay and fight to defend your place in nullsec, or if you perhaps sneak out, tail firmly tucked between your legs, to hide out in highsec.. Even though this is just 'an internet spaceship game', it does feel like a real test of character vis à vis your corp and alliance mates. Obviously, I am staying, even though my PVP skills aren't that great yet.

For now, we'll be alert and ready, waiting for that red wave. It may yet come..
at 19:00 No comments:
Email ThisBlogThis!Share to TwitterShare to FacebookShare to Pinterest
Newer Posts Older Posts Home
Subscribe to: Posts (Atom)