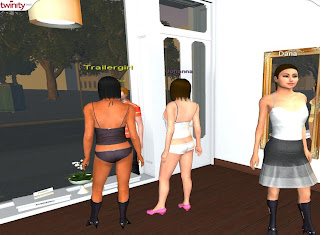 One of the more interesting areas of virtual worlds, is their economy. Much has been said about that in recent years, most of it by people much smarter than I. But, living in multiple virtual worlds makes for some interesting observations, and today I’d like to make some comparisons between two virtual worlds I’m familiar with: Second Life and Eve Online. More specifically, I'd like to discuss the impact of geography on the markets in those worlds. And I'll throw in some Twinity as well; the picture here was taken in Twinity's Wundervoll underwear store.

Second Life shortcuts
Before entering Second Life, I imagined it to have cities, more or less like real life: concentrations of people, goods and services, lots of these available (preferrably) within walking distance. Pretty soon however I realised that almost no one walks to a shop in Second Life. Instead, you'll look for something in the Second Life viewer's search menu, and when you find it, you teleport to the location where the item is on offer. Once there, you make your purchase and teleport out again; sometimes you’ll shop a bit in the neighbourhood if you see something appealing nearby, but usually it ends there. Granted, there are a few (RPG or themed) villages where one might find multiple shops, and there are shopping malls, but the main locator for goods or services is still the search directory. This means there’s no need to physically concentrate shops or services; hence, there are no real large shopping or trade hubs in Second Life as far as I know of. Shopping is not driven or constrained by geography; it's governed by the search directory.

New Eden's rocky roads
In EVE Online, the situation is much different. The EVE galaxy (called New Eden) is divided in some 5000 solar systems, connected by stargates which allow pilots to travel between them. Solar systems are grouped into regions, regions in empires. Each region has it’s own market for goods, because in New Eden, geography is a factor: travel and transport take real time! Flying from stargate to stargate, jumping from system to system, a trip from one place to another may take a lot of time (perhaps even more than an hour), and there's no shortcut or instant teleportation like in Second Life. Add in the constraints on the amounts of goods ships can carry (not everyone can transport large amounts of goods in the cargo hull) and the risks of low security systems where you might be ambushed by pirates, and it will be clear that in EVE Online’s marketplace geography is a strong factor, much like real life I might add. Most people are lazy, they are willing to pay a bit more if they can get an item here and now instead of flying around the galaxy to acquire it. they just prefer to buy their goods as close by as possible, for a acceptable price of course.

Lorry drivers in space
And this is also why Eve Online has a logistical sector and professional traders, the haulers and merchants of space. Price differences between certain items in different regions can make for good trade! Buy low in this region, sell high in another.. merchants and traders know these differences and act upon them. Other players do the transport of these trade goods, they are the lorry drivers of space, flying their enormous freighers from station to station. They will - if the price is right - transport the trade goods throughout Eve Online, as per the agreed contracts. In Second Life, you'd just transfer stuff from your inventory to another person's, but in Eve Online, real transport is involved, and real players accept the transport contracts offered by traders and haul the goods and materials all over Eve Online for a real reward.

Natural change
Still, even with all the hauling and trading going on, supply and demand will vary per system or region and, more or less naturally, certain systems will emerge as preferred places to do trade. And so, Eve Online has real trade hubs: well known across New Eden are places like Jita, Oursulaert and Dodixie for instance. But most regions too have their hotspots; regional hubs with less appeal and a smaller market, but still interesting places to sell your stuff. These days, I sell most of my goods at Alentene, a regional trade hub of the Verge Vendor region.

Interesting things happen to trade hubs. They were not intentionally created or maintained to be hubs. They just happened, probably because of the circumstance which the gameplay made possible, for instance the availability of good mission agents or the opportunity to do factional warfare. This means they are not static, and changes in the circumstances (gameplay) will affect their regional and supraregional markets. Todays’ busy trade hub may be a quiet backwater in a years’ time. As alliances and balances of power shift, as corporations, agents or certain types of gameplay move to different systems, pilots and merchants might find themselves compelled to move to greener pastures in order to keep their businesses going, and within a short time, the place may be virtually deserted. A natural process, which has happened uncounted times on planet earth, repeats itself in New Eden.

Twinity
So where does Twinity fit in? Is geography a factor? How about teleportation? As said before, Twinity attempts to be a mix between real and virtual life. Twinity does have virtual recreations or real world cities: Berlin most notably, but there's talk about Singapore and London as well. If you own a store in the real Berlin, you can hire the same spot in Twinity's Berlin as well, and you can sell virtual copies of your original goods there. You can teleport to this location, but geography is still a factor; not in terms of distance, but certainly in terms of location.

In a next post (expected later this weekend) I want to explore some more differences between these three virtual environments!
at 22:35
Email ThisBlogThis!Share to TwitterShare to FacebookShare to Pinterest

Good analysis of the differences. I've played both Eve and SL and I can see the parallels and differences you describe.
Haven't heard of the third game before though, but it sounds comparable to second life-- location seems to be a factor in both, but not distance really. Not like in Eve

Thanks! I was under the impression there weren't many people who play both Eve and SL, but there seem to be more than I thought.

it's impossible for people to understand anything to this article if they are not play Eve.