A carebear with claws 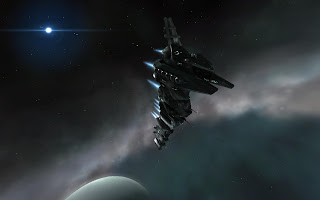 Tonight I had a little bit more excitement in Eve Online than I initially bargained for: someone very nearly destroyed my Myrmidon. If that would have happened, I wouldn't have survived either.

But first, let's go back a bit. I bought this ship a few days ago, because the Vexor cruiser I was flying just didn't have what it takes for some of the more heavier missions. The Myrmidon is more resilient and has more options, so I bought one, fitted the modules I was allowed to use or saw fit, and did my first level 3 mission. That mission happened to take place in a 0.4 system, which makes every pilot there fair game for pirates, griefers and other scum. Between 0.5 and 1.0 systems are reasonably safe (with 0.5 as least safe and 1.0 as the safest) because Concord provides a certain degree of protection against these guys, but below 0.5 that's no longer the case.

After this mission I returned to this 0.4 system and even though I knew it wasn't secure, I was still quite shocked when another pilot locked on to me and opened fire, completely unprovoked. I tried to warp out but that wouldn't work; the other guy used a warp scrambler which effectively disabled my engines. I was dead in the water! There was no option but to fight and as fast as I could I enabled my damage control and armor modules, while simultaneously returning fire and launching my scout drones. So the battle was on and initially it didn't look good for me, as I lost shields and armor in a quicker pace than he; I just couldn't match his firepower. It seemed to be only a matter of time before I lost my ship and lots of my possessions. Then I remembered to enable my armor repair units and that seemed to turn the battle; my armor held steady, while his was quickly blown away.

In the mean time, I completely lost control over what was going on around me. Our ships, our drones, and then to my surprise someone elses ship and drones circled one another, exchanging rapid fire at only a few thousand meters apart. I couldn't figure out who the third ship was, or who exactly was firing at whom, but I assumed I had a whole gang of pirates blasting away at me - and yet my armor held, while the assailant's didn't!

After two or three agitated minutes, the enemy exploded, which broke the warp scramble, so I attempted another warp at the nearest stargate. Ordinary, after a kill, one would try to loot and salvage or at least take the other guys' drones, but I was happy to be alive and completely unsure about the third persons' intentions so I just tried to get out as fast as I could. As luck would have it the third person didn't scrable my warp and I got out - in one piece. I survived a PVP encounter!

Later, while checking the Battleclinic killboards, I found out that the third person was not fighting against me, but with me. He was the one who destroyed the enemy; he inflicted significantly more damage. I don't know why he sided with me, but he saved me, and for that I am grateful.

A little while later, I returned in a fast and small frigate to see if there was anything left to loot or salvage. I found the enemies' drones still flying around, so I quickly scooped those to my cargo hold and flew back home.

I've learned a valuable lesson: trust no one in space if you're in low sec sectors - i.e. anything below 0.5. And, even when you're a carebear, remember to bring your claws.. they may save you one day!
at 19:58
Email ThisBlogThis!Share to TwitterShare to FacebookShare to Pinterest