One of the most appealing parts of virtual worlds, is the ability to show world famous landmarks to anyone with a computer strong enough to run the necessary software. I can't afford to visit the Forbidden City in Beijing for instance, but I can get the gist of it through the virtual rendering, as you can see here. Another example: I have visited the Vatican's Sistine Chapel in real life, but in Second Life I could really take the time to appreciate the build, and view it from very unusual angles.

Twinity is perhaps the virtual world best suited to showing real world landmarks in a virtual setting. The platform also provides the opportunity to integrate the past and present, as Metaversum demonstrated when they celebrated the 20th anniversary of the fall of the Berlin Wall.

Today, Twinity's virtual London became a lot bigger. Famous landmarks along the Thames river such as the Big Ben, the Westminster Abbey and the 'London Eye' became available. Due to family matters I couldn't spend too much time, and it was already evening, but here's a few snapshots of the Westminster Abbey and the London Eye, the way a real world tourist would never be able to view them. Enjoy! 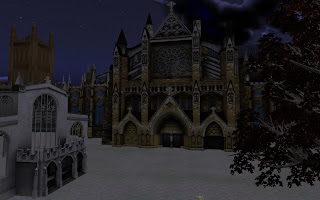 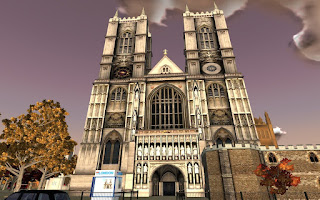 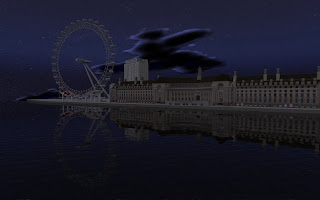 More Twinity London snapshots: at my Koinup page as usual.
at 23:52
Email ThisBlogThis!Share to TwitterShare to FacebookShare to Pinterest