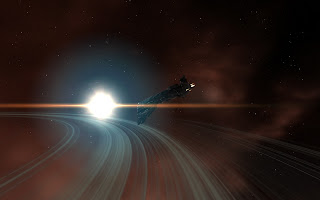 In a special edition of the Eve Blog Banter, CrazyKinux asks: Why do you love Eve Online so much?

Good question. I have been active in virtual worlds from mid 2006, when the Second Life hype hit. IBM went head first into virtual worlds, and I, being an IBM watcher and corporate blogger, followed suit to see what the fuss was all about.

I never was much of a gamer. I don't own a console and never bought a PC game; I never really made it past Minesweeper as far as PC gaming goes. And yet I have been in Eve Online for nearly two years, and I'm not about to leave; because Eve Online is, to me, one of the most interesting and advanced virtual worlds currently in existence. Let me explain why.

Mythology
Tranquility's single shard model allowed Eve Online to develop a coherent mythology, that is relevant to pilots every day. It's not just a nice backdrop for staging internet spaceship fights; New Eden wouldn't be the same without the lore. But this mythology not just found in the CCP written official history of New Eden; it is created anew, time and time again, by the pilots themselves. Epic clashes between major alliances, infamous heists, notorious characters, battles won and lost! It all adds to the player created lore. These are tomorrow's myths, to be narrated to n00bs in local and corp chat for years to come. It's possible in the continuum that is New Eden, but only there.

Economy
But other than impressive stories, the single shard has also given rise to an advanced economy. One of the things that make Second Life interesting, is that SL residents design unique objects. But there is no such thing as geographical distance which would necessitate transport, or which would allow trade hubs to evolve. And: in SL you can create anything out of thin air, meaning there's no raw materials to build from; there's almost no initial cost. New Eden's economy doesn't know unique objects, but distances really count, and raw materials are needed. Sources of these raw materials need to be exploited, ores transported and sold before goods are made, which can then be sold off. Hence the need for miners, freighters, industrialists, all making a living off the production of goods. It's much more developed and realistic than other virtual economies I've seen. All in all, I'd say Second Life has a market, but Eve Online has an economy.

Corps and alliances
Lots has been said about the social side of the capsuleers' universe. Here, too, the single shard design is instrumental in bringing about something special. New Eden's player driven infrastructure of corporations and alliances - and the dynamics of trade and conflicts between those - is what's keeping Eve Online alive and vibrant. It facilitates a lot of interesting and meaningful social interaction, and it also provides the framework of much of the player driven mythology mentioned above. And again, it wouldn't be possible - not on this epic scale at least - in a sharded environment.

World view
Another interesting point is Eve Online's world view. It's not pretty, but much of the real world - unfortunately - isn't either. Second Life has more of a sixties love & peace vibe, and while it's entertaining it doesn't always feel right to me - because I don't think humanity, in itself, is like that. Eve Online shows this darker side of humanity.

While writing this down, I realised I'm missing something here. There's more! Eve Online, interesting, fascinating, gritty and dark as it can be, is also beautiful to see, plain engaging, and often fun. In the end, that's what seals the deal, that's why I love Eve Online.
at 20:28
Email ThisBlogThis!Share to TwitterShare to FacebookShare to Pinterest

Nice post and grats on your win in CK's contest. I think one of the reasons EVE is so compelling is that New Eden feels so real--the virtual economy, harsh consequences, and risks every time you undock all contribute to that perception.