CSM candidates: why I don't vote for you

Eve Online is developed and maintained by the Icelandic company CCP. For a while now they have had the CSM, the Council of Stellar Management: a council, comprised of democratically elected players, who represent the player base in discussions with CCP. Some say it's very effective and valuable; others say it's nothing of the kind. I don't really know, frankly, but I still vote as I think it's about the only way for me to add something to the discussion between CCP and us, the inhabitants of New Eden.

So, I'm about to vote for one of the candidates for CSM. But whom to vote for? There's forty candidates, and I don't know any of them. 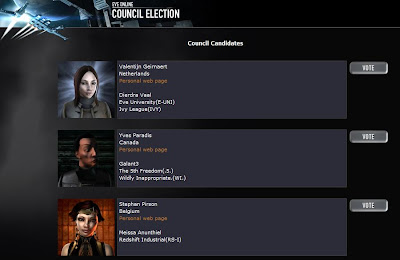 So, before voting, I would like to know a bit about candidate. Who are they, what are their goals? First step: to their website or blog! Except, many of them don't have one. Even though the candidate page features a link to their website, and even though it takes - perhaps - five minutes to sign up for a free blog account somewhere, many of the candidates fail to list a website. Memo to candidates: I don't vote for you if I can't easily find who you are and what you're going to do for me once elected to the CSM.
Two of the candidates FAILed in a slightly different way. They created a website, but never updated it with content. Samples here and here. Tell me, why should I vote for someone who can't even manage to update their website on time?
Another candidate registered a myspace page, but never updated it after that, either; he's got '0 friends' listed. Not exactly a ringing endorsement isn't it? Perhaps you should have gone with a blog page instead, but I'm almost tempted to vote for you out of pity.
One of the candidates only has a French language website. Moi, je ne votez pour vous, as I can't understand a thing you're writing.

You might be surprised that almost half of the 40 candidates fail this first screening: they do not have a website, didn't bother to update it with meaningful content or failed to provide a link to CCP prior to the start of voting.

One candidate states he wants to "join the CSM to .. CCP" and proceeds to tell us how he likes to boss people around, being a CEO and all. Yeah right, that'll teach them! Oh and btw, I'm not voting for you.

A few candidates seem preoccupied with one single issue; I'm not voting for them, as their issues don't concern me.

Some candidates consistently fail at spelling certain in game words correctly; if you can't be bothered to get the in game stuff right, I don't vote for you.

Others represent parts of the player base I'm not a part of; I obviously don't vote for them either, but at least they are viable, legitimate candidates with a story to tell, even though it's not mine. They will probably get voted in the CSM by their constituencies (for instance alliance and corp mates) anyway.

This, finally, leaves me with a handful of candidates that have, so far, passed the first test. I'll have to check them out; one of them gets my vote!
at 22:30
Email ThisBlogThis!Share to TwitterShare to FacebookShare to Pinterest