Live streaming the Fountain war: the impact of Mad_ani

For us in The Netherlands, CNN became famous when they covered evens such as the fall of the Berlin wall and the 1991 Gulf war in Kuwait and Iraq. The fact that you could watch history unfold, live on TV, was still new to a lot of people back then. For a while, CNN became the household name for live coverage of 'breaking news' evens and to some extend it still is - although I get the latest news facts through Twitter, these days.

For Eve Online, many war stories have been told (and told well I have to say) and some events were frapsed so that we could view them on Youtube later. But as far as I know, there has not been a lot of live war coverage.

This has now changed significantly. Basic live streaming Eve via Twitch.tv doesn't require a lot of effort anymore, and many people have dabbled in it. Personally I have done some 'Jitacam' and 'AmarrCam' streams, and I tried to do some live reporting on Burn Jita II, but it never really got anywhere. Still, I am planning on doing this more often, when I have the time to do a proper setup. 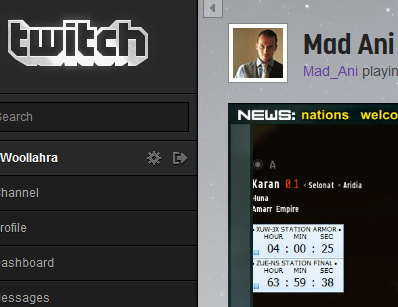 Mad_ani (aka Simon, DJMad) however has, in recent weeks, really taken Eve streaming to the next level. I first saw his live streams during the N3 vs Solar war in the east, and he's grown a lot since then. One key advantage that Eve streamers have over real world news outlets: in Eve, you often know when a fight will happen, due to the way sovereignty works. This means an Eve live broadcaster can attempt to get in position well before the anticipated fight begins, create the necessary bookmarks etcetera. During the current Fountain war, Simon has done a great job of attending those timers, meaning he has been able to show a lot of fights and significant events. As a result, his (appreciative) audience is growing rapidly. At the moment of writing, there isn't a lot going on so the stream just shows the TEST and CFC staging stations, and there's still 800 people watching!

That audience includes many people who are clearly new to Eve Online: there are often newbie questions in the Twitch live stream's chat room. Live streaming a war might be a good way to lure new pilots into New Eden, and I bet CCP is happy with the attention Simon is generating for Eve Online.

Update: just spotted this on the Twitch chat box, and it's precisely what I mean:

fritzfantom: i just clicked on this stream by browsing twitch, stayed for the music and now exploring eve - thanks ani <3


As for myself, I now routinely view Mad_ani's twitch page before reading other Eve news sources, and it's something I keep an eye on whenever I can. The way I experience a war in Eve has changed significantly. Simon really is the CNN of New Eden, at the moment! I suspect we'll see many more live streams in the future though, opening up more of Eve for interested pilots and outsiders alike.

All in all, I am amazed by what is happening, and I congratulate Simon with his current success! Follow the man on twitter: https://twitter.com/SimonakaDJMad
Or on Facebook: https://www.facebook.com/SimonakaDJMad
In case you missed the link above, his Twitch.tv page: http://www.twitch.tv/mad_ani
at 19:54
Email ThisBlogThis!Share to TwitterShare to FacebookShare to Pinterest

Wish he would stop acting cool on his stream with the lame GF shit tought.

Correction, Mad Ani is the 'old' CNN of new eden.
CNN has only fallen to whoever gives them the most money, which happens to mean we get no coverage of anything remotely important and only hear about "So&so dog brutally attacks reporter" - which the video shows the dogs wanting attention, and the reporter making a fool out of herself. That probably only escalated into that scene cause the reporter refused to stop messing with the person.
Basically, CNN is shit. Mad Ani is a real reporter.

Anonymous: to be honest, I referred to the 1989 and 1991 events for that reason. Back then, they were different than today it seems.

True enough Sered, and my bad if I insulted you as it was not my intention. Although that is the best metaphor, it seems insulting to Ani to be compared to CNN with how they are now. :)

Either way, nice post and keep up the work!