"EVE Online is a unique piece of science fiction that is ‘participatory’." - CCP Seagull, December 2012

EVE Online is heading into its Second Decade with renewed vigour and a new development strategy. At the CSM Summit in December, Executive Producer CCP Unifex and Development Director CCP Seagull explained how future development and expansions will be broader in scope than recent "collections of features" stating that CCP "want to create something more inspirational, that players aspire to play."

With the return of Live Events such as the Battle for Caldari Prime, clearly the prime fiction of EVE
is back in favor as part of this new thematic approach to expansions. However, EVE's story is very much a tale of two play styles, with an entirely player-driven narrative unfolding daily in parallel to the reinvigorated backstory. Often, they do not mix well. How can these two disparate elements be united or at least comfortably co-exist in a single sandbox universe?" 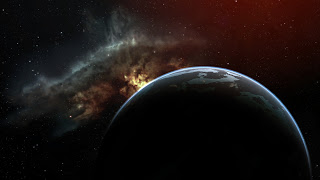 One of the main draws of Eve Online - at least in my experience - is that it is not ‘just’ a game, but a persistent virtual world. Its’ inhabitants may have begun their careers with a carefully planned development path in mind or they may have meandered through Eve, tasting a bit of this, doing a bit of that, sampling what’s on offer: the variations are legio.
Intertwined with all these career related developments, are a multitude of player interactions. These happen in countless corporation and alliance channels, open channels, TeamSpeak conversations but also out there in space, where player made choices pit pilot against pilot in pvp or in a struggle for resources (..ok, I mean guys mining together).

The combination of so many variables means that there are no identical Eve players. There is not really such a thing as a ‘level 45 paladin’ or ‘level 25 wizard’ in Eve; every pilot is unique, and so is his or her story.

Eve lore has always been part of these unique and different stories. Wormholes came, and some players adapted, ignoring them as much as they could, continuing with their own path through Eve. Others, however, profited from these new found sources of fun and profit. Factional warfare came, and the general population adapted while others jumped in, joining an FW corp. Incursions came, and the same happens: some pilots ignore them as much as possible, adapting to their occurrence every now and then; but others jumped on the Incursion running bandwagon (and made obscene amounts of ISK in the process).

These are clear examples of lore driven additions to game play have been beneficial for Eve Online, expanding the options and opportunities available; but some players dive right in while others don't.

And that's perfectly fine in a virtual world, a scifi simulator such as Eve Online. In a sandbox, you should be free to pursue your own path. Forcing lore based events on unwilling pilots runs contrary to that, and might be bad for business. And so far I think CCP has done a good job in this area.

Other entries here: http://freebooted.blogspot.nl/2013/04/blog-banter-46-main-event.html
at 21:06
Email ThisBlogThis!Share to TwitterShare to FacebookShare to Pinterest