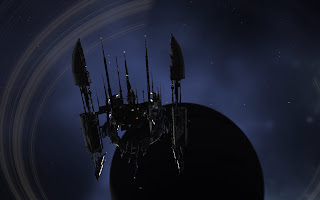 It must be about four years ago, that I first set foot in Second Life, to see for myself why IBM was making such a fuss about it. And while I have (obviously) enjoyed it, there was one thing bothering me: I didn't enjoy being in SL if I didn't have a clear goal. I need something to do, to see, to take care of.

Same with Twinity, which I first entered in early 2008. It is developing nicely, shaping up to be a nice social virtual world, but I need something to do. Chatting with Monica is always a good reason to be in Twinity, as are the mirrored cities and places. Those, and the community as a whole, keep me engaged.

I enjoy Eve Online because there's always something to do, but it's not a social world. It's a scifi themed sandbox universe, aimed at player versus player combat, player versus environment, industry, market manipulation. Large scale combat and politics between large player driven alliances color the eve online news. Yet the social connections are there, too; players meet in corporate and alliance chat channels or even in the local solar systems' channel. These connections are often quite meaningful, as corporations often have a core of seasoned players who've known each other for years.

But now space is about to become much more social, now that Incarna (also known as 'ambulation' and 'walking in stations' is finally announced for Eve Online's summer of 2011 expansion.

Finally, real avatars will be able to meet at a bar in a station and talk things over, do some games - it's not yet known what will be available in Incarna's initial release, but you get the idea. Especially in highsec trading hubs, I expect the social aspect of Eve Online to become more important.

A beautiful universe, with plenty to do and countless choices available - with meaningful, immersive, social structures in place. What's not to like!
at 19:17
Email ThisBlogThis!Share to TwitterShare to FacebookShare to Pinterest

Yeah I know what you mean :) Incarna has been talked about for such a long time..