Why remove local in nullsec?

It's that special time again: Eve Online's pilots are speculating on what might happen to their beloved game, after CCP Zulu posted a short and cryptic devblog earlier today. Currently, these speculations tend to revolve around a few important issues, with the coming nerf of the (currently overpowered) supercapital ship class and the redesign of nullsec space featuring most prominently.

Something else that's frequently mentioned, usually as part of the nullsec redesign, is that nullsec space should not have a local channel. For those unaware of Eve Online's workings: the local channel is essentially a chat channel, showing you who's in the same solar system as you. When you're flying through nullsec, you'd be wise to keep an eye on said channel. Being aware of enemies or neutrals in your area of space can be a real lifesaver!

Until Apocrypha, all solar systems in New Eden had a local channel. But the wormhole systems that where added with Apocrypha, did not. The lack of local intel means it's much more dangerous to live in wormhole space, as anyone could descend on you, guns ablaze, without any prior warning whatsoever.

Of course, there's ways to work around this limitation, but only partially, by using the directional scanner or scan probes. But those either give you incomplete information or are cumbersome to use, and not easy to combine with belt ratting or running anomalies. As such, for pilots involved in these PVE activities, removing the local channel is a major loss of available intel.

Earlier this year, nullsec PVE got nerfed: from that moment on, the occurrence of the most lucrative anomalies/complexes is limited to only those systems with the worst security rating available: -0.9 or -1 truesec. The rest of nullsec has to make do with less valuable targets to pursue, and many pilots have since moved back to highsec where level 4 missions bring in copious amounts of ISK in exchange for very little risk. So, nullsec has become less rewarding, and many systems are really quiet these days.

Would removing the local channel fix this? I don't think so. PVE in nullsec would become even more risky, and may not be worth the hassle anymore unless you happen to live in one of those rare systems with that low truesec of -0.9 or -1. Some regions don't even have those!

Cloaked ships can't even be scanned down, and their pilots already have a huge advantage over regular pilots, even when they go AFK for hours on end: there's no way to track them down, they are essentially invulnerable. But, at least you know they're there! Now take away local, and the picture gets even worse: there's  no warning whatsoever of their existence anymore. A cloaked stealth bomber could be near you, and there would be no way for you to find out, until he bombs you into oblivion. Not exactly 'leveling the playing field' if you ask me, especially when you keep in mind  that most regular PVE areas (complexes, anomalies, asteroid belts) in Eve Online are easily scanned down or otherwise easily available and accessible to anyone.

Removing local, without providing viable alternative ways of protection for (solo) PVE pilots, and/or increasing incentive for PVE pilots to remain in nullsec, would turn even more of the available space into deserted wastelands. I'd hate to see that happen!
at 00:30 No comments:
Email ThisBlogThis!Share to TwitterShare to FacebookShare to Pinterest 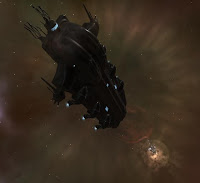 When the Apocrypha expansion hit Eve Online, lots of us eagerly jumped into the nearest wormhole to start exploring. And many of us overenthusiastic pilots lost their ship, either because we were unable to find our way back out of the wormhole, or because we got killled en masse by the Sleepers, the mysterious guardians of old Jove complexes in wormhole space.

When you're used to the regular NPC enemies in Eve Online - the belt/mission rats - Sleepers can be a nasty surprise. Their AI is more advanced, they are less predictable, making them harder to beat.

As it stands now, regular PVE in Eve Online highsec could use a bit of spicing up, and last night I wondered: perhaps it's time for the Sleepers to aggressively respond to the ongoing infiltration of wormhole space. Let them come out of their hiding, let them infiltrate regular space, let them get some revenge! Eve pilots can enter and exit wormholes.. why couldn't Sleepers do the same? If a wormhole spawns somewhere, Sleepers could appear from the wormhole and spread throughout the system, infecting belts or complexes, harassing pilots near gates or stations, perhaps even invading deadspace mission areas.

The nice thing about this is that it would create a level of uncertainty for (PVE) pilots. When you go out ratting or on a mission,  you (should!) know what NPC rats to expect: each system in Eve Online has only one documented and well known type of belt rats. In missions, the type of mission rats is predictable as well, with their logo featuring on the mission description, and more explicit descriptions available on sites such as eve-survival. With this knowledge, you can fit your ship accordingly, with optimal resistance against the types of damage those specific rats do, and the appropriate ammunition that is known to be most effective against them. But if you encounter a Sleeper instead of a regular rat, things change. Sleepers do all known damage types, and therefore require a different ship fitting, and perhaps you'd need other weaponry or ammunition too. And given that wormholes come and go, seemingly without a pattern, you never know when or where you might encounter the Sleepers spawning from them.. Suddenly, the same ol' fitting for the same ol' belt ratting may not be cutting it anymore.. A lot of uncertainty would be injected into a now essentially stagnant area of Eve Online.

As for the Eve Online story line, this 'revenge of the Sleepers' could set the stage for a greater role for the Jovian race in New Eden. Eventually it could even lead to a full blown Jovian themed "Apocrypha II" expansion, featuring Jovian incursions via wormholes, or the opening of (parts of?) Jovian space to Eve Online pilots for instance.

An added bonus.. the spawning of less predictable Sleeper AI in PVE areas of Eve Online might be an extra hurdle for the botters out there, as their programs would have to take into account a much less predictable environment than today.

(blog entry banged out in response to this Kirith Kodachi blog entry)
at 00:30 No comments:
Email ThisBlogThis!Share to TwitterShare to FacebookShare to Pinterest
Newer Posts Older Posts Home
Subscribe to: Posts (Atom)